The Typical Norwegian Food You Must Try In Norway |...

Traditional Norwegian dishes are usually based on fish. Salmon is always come first in mind when someone talks about the typical Norwegian food. Eating in Norway can be quite a quality gastronomic experience.

If we ask someone about the typical Norwegian food, the salmon will probably come immediately to mind. And, indeed, this product is traditionally popular in the cuisine of this country. However, there are many other dishes and foods that make up the culinary culture of Norway, some as surprising to Spaniards as the whale or the moose.
Eating in Norway can be quite a quality gastronomic experience, but you have to be clear that the prices of food there are much higher than in our country. In fact, in general life, there is more expensive, and eating in a restaurant can usually start at thirty euros per person.
But lovers of gastronomy have the opportunity to discover new dishes and foods hand in hand with Norwegian cuisine. Do you want to discover what are the main secrets of typical Norwegian food with us?

The typical food of Norway

Norway is a place with a very cold climate, and a large volume of its cuisine is occupied by fish. The salmon is the most famous and perhaps one of the contributions of this country to the cuisine of the world. The exports that make this product to any part of the planet are very high, so in many places, we can find salmon from these areas.
But within the typical food of Norway, we can also find other fish, such as a whale or dried cod.

READ  "BECKFRIENDS.COM" - Send Anything Anywhere & Earn as you Travel

The whale is a dish of traditional Norwegian food, although it is less and less widespread among restaurants in the country. The truth is that the current fishing restrictions of this animal. Although before it was used as a cheaper substitute to game meat, nowadays it is a product certainly peculiar and, undoubtedly, different from the most common options of gastronomy. The most daring can still try this fish in many restaurants of the Norwegian territory. They say that the taste is strong and dry; do you dare to check it?

Cod is a product that has been exported from Norway to the whole world for centuries. It is one of those foods that Norwegians are proud of, and the truth is that the climate and conditions of this country make this animal grow up in unique conditions.
In Norwegian cuisine, we can find fresh cod or skrei cod, one of the delicacies of this country, and also dry cod or tørrfisk (as it is called in Norway). Skrei cod is the highest quality, which can only be enjoyed during the three months of the year. On the other hand, dried cod has the peculiarity that it can be eaten directly, without cooking it, or in stews, for which it is necessary to rehydrate it.

In those waters so cold and clean, seafood is another delicacy of typical Norwegian food. Mussels, clams or prawns are of great quality. However, one of the seafood that attracts the most attention is the king crab or King Crab.
It is a very common product in the north of Norway and its meat is a delight for seafood lovers. 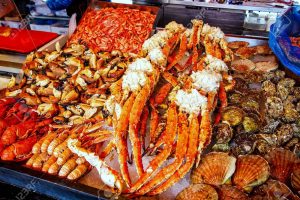 The reindeer is one of the most hunted mammals in Norway and is one of the most typical and widespread products in the country. And it is one of the animals that abound in this area of northern Europe. It can be consumed in different formats and recipes, from the sausage to the stew.
Its flavor is different from the meat we have tasted in Spain, it has a very special touch that gives it an unmistakable personality.
If you travel to Norway and do not try the reindeer, you will not have gotten fully into its gastronomy.

Elk is another of the meats that can be found in restaurants, markets, and culinary markets. This meat is usually prepared in stews and is presented as a real delicacy if cooked properly.

The lamb is also a typical meal of Norway, considered one of the best steaks in the world. The pastures where sheep and lambs feed and the climate and the little contamination of the country, cause that the meat of a lamb is a pleasure for the senses.
Ribs or lamb chops are very typical at Christmas time. And, in addition, there is a dish for the less scrupulous: the smalahove. It is a complete sheep or lamb’s head, and everything is eaten! (Yes, yes, eyes included).

Cheeses are also very popular and are a very typical Norwegian meal. In particular, there is one that is especially curious, as it is brown. We are talking about brunost or geitost, a very sweet and brown goat cheese, whose taste is really surprising because it tastes like toffee.
However, the large presence of traditional farms in the country means that there are many other types of cheese, mostly goat, and cow.

READ  This Bengaluru based startup is Cleaning Sewer Pipes through Robots

The waffles are very typical in Norway. For those who do not know, it is about waffles, but with a shape that allows you to fold them to eat them with one hand as if it were a sandwich.