This post was most recently updated on April 27th, 2019

” The project was launched in November 2017 for beta testing. It took 5 years for the team to reach where we are today. And after almost 10 years of planning, I finally decided to quit my job in a reputed company and decided to take the plunge. The initial task was building the first prototype. When the first prototype was a complete failure due to multiple factors, regaining the confidence to build the core team was really the first challenge ahead”, says Mr. Aghin Johnson Founder and Ceo: Social Mob.

What prompted was the lack of a true social networking where it helps to connect with people with similar interest thereby expanding the social circle rather than connecting with the people whose number is saved on the phone or the immediate social circle. The inspiration moment was when after years of research on music and its effects on psychology resulted in understanding the right balance for an effective content delivery system which will inspire the mass. When the technology boom happened by 2012 with smartphones and the coming years with the cheaper internet, my gut feeling was to take the plunge and here I am today with a 20+ strong team highly motivated and ready to go the distance with high technical skills and support from over 500 Artists from around the world.

The first founding members were my dad ( P.M Johnson ) and myself (Aghin Johnson)  My dad has zero knowledge of the technology but his years of experience in Business management of his Grocery business gave me not just the initial money but also the support and guidance to build the company and putting in my savings and the whole new chapter started. 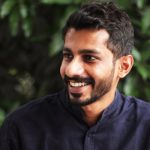 The Journey was a roller coaster ride for the past 4 years. Thinking of the journey reminds me of the days traveling down to Bangalore, meeting developers and experts to understand the scalability and tech viability, and my car as an office and home. In the initial days, it was a one-man show and the challenge was to build the team and when looking back the journey it was indeed a task yet fun and most importantly filled with huge learning moments.

For funding and development, I have created a division called Pi touch. Pi touch is a Business consulting and creative agency working with some of the top brands in India. So far we have created a sustainable model to bootstrap the concept. So right now as we have proven the model, we are in talks to scale the project globally.

” Socialmob as a community we are looking to gain close to a million users by end of this year. And as a database, we are already in talks with top artists from around the world to join the community contribution model”, says Aghin Johnson.

The irony is the opportunity is the biggest challenge as well. The app world is so crowded these days with very fewer retention chances. Everyone is in search of something disruptive. But the truth is seldom is an app born which is not a replica or a rip off of an existing app. We understand our app has multiple layers and each functionality calls for a comparison. It has music so is it a gaana or a Spotify? It allows networking and sharing pictures and posts, is it Facebook or Instagram? But it has its own radio streaming and also so many articles to read? The challenge is to make the user to see it as a whole and not compare it with an existing service as its so easy to think its a replica while forgetting the whole time that it’s an all-in-one!

Hence our marketing strategy is to address this confusion. To make the world realize, yes it is completely possible to have an app with unique features as well as familiar ones but the best being an option to enjoy it all in one place and give it the right recognition of being the only one of its kind project from India

Till date, we have not raised any outside investment. We are looking forward to opening up our stations in multiple locations around the world thereby improving the content acquisitions. For the same, we will definitely require partners both in terms of knowledge and financial backing. We are currently waiting for the right partner to take the next step

A quote from the founder on the journey, or dealing with the challenge, or any inspiring moment.

Honestly, it’s been a learning so far and lots more on my way ahead for sure. But few things I have learned would be to trust your intuitions, it’s often the first truth and you feel that for a reason. When you know you have a good team, appreciate them and treat them with respect and trust and they would do the same for you. Lastly, there are no enemies in a business, just people with different views and be open to accepting.

I haven’t driven all the way to start advising people, The two things I always tell my younger self, always have the patience to listen to others, especially your customers/ target audience, secondly always believe in yourself and what you work for cause without belief it’s simply like skydiving without a parachute.